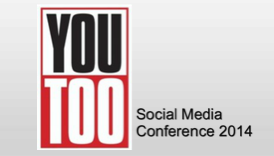 CiviliNation founder Andrea Weckerle presented the opening plenary session “Too Much Digital Drama: A Better Approach to Online Discourse and Conflict” during the YouToo Social Media Conference 2014 at Kent State University on April 11, 2014.

CiviliNation and CiviliNation founder Andrea Weckerle’s book Civility in the Digital Age: How Companies and People Can Triumph over Haters, Trolls, Bullies and Other Jerks are recommended in The Online Mom as Resources to Promote a Positive Online Experience.

Are you connected with CiviliNation on social media? If you are, thank you! If not, join us!

Michael Roberts is a licensed private investigator and the Founder of Rexxfield, a company that assists and supports individuals who have been the victims of online lies, defamation, and privacy invasion by identifying anonymous authors and  “…rendering all reasonable assistance in order to have deceptive materials retracted or hidden from the public domain and the victims’ good name and reputation restored.” In this interview with CiviliNation, Michael shares his thoughts about the recent lawsuit by Ripoff Report against him and how he prevailed.

CiviliNation: On November 18, 2013, a ruling by the Superior Court of Arizona in Maricopa County (Arizona Case CV2013-012936) found against Xcentric Ventures, LLC dba Ripoffreport.com in its attempt to obtain a preliminary injunction against you and the websites you maintain that have been critical of the Ripoff Report. By way of background, what is Ripoff Report and why do you oppose it?

Michael Roberts:  Ripoffreport.com is a notorious website that, according to a Florida appeals court has “appalling” business practices and  “…appears to pride itself on having created a forum for defamation. No checks are in place to ensure that only reliable information is publicized.”

I oppose Ripoffreport.com because it is a source of personal injury, through defamation, for hundreds of thousands of victims, for which there is no reasonable relief, except a small proportion of victims who can affords tens or hundreds of thousands of dollars for litigation,– and even then without any guarantee of relief. It is estimated that less than 20% of the 1.7 million reports are credible, the rest are likely to be malicious competitors, jilted lovers, or other poison-penned vandals.

CiviliNation: Which of your websites have spoken out against Ripoff Report and what did they report?

Michael Roberts: I administer two websites that were subject to Ripoff Report’s failed litigation; the first is BadForPeople.org,  which is a protest and exposé platform that focuses on unethical journalism in both the traditional media and the new media (the interwebs), and AuthorizedStatement.org, which is a temporary right-of-reply provision for victims of internet and media defamation. The latter gives victims a loud voice on page 1 of Google to refute their detractors. The boycott of Ripoff Report’s financial enablers was the brainchild of Dr. Janice Duffy, I simply executed her plan through my websites; Janice did the heavy lifting and research.

CiviliNation: Why is the Arizona court’s ruling important?

Michael Roberts: On November 18, 2013, the Superior Court of Maricopa County denied Ripoff Report’s request to enjoin the speech of our team, it found that our activities are protected as free speech under the First Amendment. The Court wrote:

There have not been too many effective challenges to the incivility of Ripoff Report’s founder Ed Magedson, due, for the most part, to the deficient and ironically named law “Section 230C of the Communications Decency Act”. Until that law is repealed or revised to provide the relief implied by its title, then victims will have only two options, (1) expensive litigation or (2) protest. Thanks to Judge Randall H. Warner, other victims and activists now have a comprehensive “how to boycott Ripoff Report” manual by way of his very clear findings, which read as an instruction manual.

CiviliNation: Are there other websites and organizations that have the same questionable business model as Ripoff Report?

Michael Roberts: Yes there are many, we have a considerable to-do list including TheDirty.com and quite a few “MugShot” sites that have been in the news lately.

CiviliNation: What is the harm that sites like Ripoff Report inflict on individuals and businesses?

Michael Roberts: Depending on how much a victim’s livelihood depends on due diligence conducted through Google, the impact ranges from mild aggravation through to debilitating social, financial, emotional and vocational paralysis.

CiviliNation: Why do you believe individuals and businesses continue to fall victim to Ripoff Report?

Michael Roberts: Because it is estimated that at least 1% of the population have anti-social personality disorder (psychopaths), the air they breathe is other people’s pain. When individuals such as Ed Magedson make his appalling website available to other conscience free miscreants, it is a perfect storm. Until Ed’s immunity under the CDA is removed or reduced, there will be no relief. Alternatively, if the executives in Google who have the power to reduce RipOffReport’s search ranking do so, then Ed Magedson and his malicious users will once again be irrelevant to all except those in their immediate sphere of influence. There will then be room for an ethical “gripe site” that can balance legitimate criticism with social justice and responsibility.

CiviliNation: Do you have any suggestions for what the public can do to protect itself against such sites?

Michael Roberts: My tongue in cheek advice is to change your name of John or Jane Smith so that you can disappear into the crowd; Ripoff Report and sites like it can only hurt you if your name or business name if relatively unique. On a more serious note, you can effect change by supporting our boycotts, retweeting our tweets, emailing links, and boycotting those who advertise on Ripoff Report. Even better, launch your own boycott and send us your links. Judge Randall has laid out the game plan… run with it!

CiviliNation founder Andrea Weckerle and her book Civility In The Digital Age are mentioned on Washington D.C. WAMU’s The Kojo Nnamdi  Show‘s Computer Guys and Gal as conflict management resources.