This guest post by Jennifer L. Evans, Houston Affiliate of the PRConsultants Group and a member of the 2013 Snark Free Day Committee, talks about the spark behind PRCG’s Snark Free Day concept and what they hope to achieve in the future.

We’re proud to have been able to support them in this year’s effort and look forward to helping them grow their initiative in years to come. 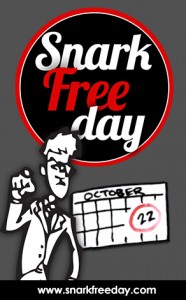 The subject of adult online bullying and general incivility came up repeatedly during the annual conference for PRConsultants Group in the spring of 2013. Atlanta affiliate Melissa Libby really inspired her colleagues to launch a volunteer-led awareness campaign for a one day break from snark. Louisville affiliate, Nicole Candler, volunteered to lead a committee effort that included creation of a web site, an awareness video, media relations outreach, a Facebook and Twitter campaign and a generally uncivil character “Jonathan Snark.” Our goal was and is simple – to reduce negativity, cynicism and snark in person and online for at least one day. Our call to action asked that participants share their campaign commitment with friends and family, fan the Facebook page, and then most importantly – on October 22 – walk the talk by being snark-free in all their communications with others ala Snark Free Day.

Was our one day campaign successful? We think so. Snark Free Day generated national attention with 1,000+ (and counting) hits all over the US in traditional media outlets, news reports, blogs, and social media channels by people who liked, didn’t like and/or were just generally amused by it – New York, Boston, California, Texas, Florida, DC, etc. Hundreds of people supported the Facebook event, confirming they would be “snark-free” for one day. Numerous individuals and groups have reported back to tell us how rewarding their experience was. In fact, one non-profit organization whose sole mission is focused on kindness saw their own Facebook page “fans” double in one week because of their engagement and advocacy of our campaign. By and large, there are people in the world around us who appreciate a gentle reminder to be a little kinder.

Were there pie-in-the-face moments? Not really. Like any idea that is promoted in our digital world, there were certainly some loud, negative and snarky responses from predictable (and unpredictable) sources. Some of the affiliates on the launch committee were surprised by friends and associates who either recoiled at the idea (citing that snark-free is counterproductive to PR or journalism or some other lame excuse) or generally ignored the call to action. That’s ok, maybe we’ll get them on board next year…

Yes, there will be a snark free campaign effort in 2014! Numerous ideas have poured in with suggestions on how to enhance the campaign, groups that want to participate in a bigger way and more. If you want to be a part of our future effort, please consider subscribing to our blog and/or sending a message to info@prconsultantsgroup.com asking to be on our “insider” list. Thanks to CiviliNation for encouraging others to participate in Snark Free Day – we look forward to working with you again in 2014!